Leave your preconceptions at the door: the Joan of Arc Historial is not a traditional museum with classic works or collectibles. This interactive journey – which was specially created to present our heroine’s saga – is a feat of technology and innovation laced with emotion.

From the start of your visit, dive into darkness and watch the stone walls come to life. Projections, screens, 3D maps, the images scroll in front of your eyes and the witnesses of the era will guide you from room to room to ensure you have an unforgettable experience.

A spectacular public space, the Historial has two aims: to help people (re)discover the saga and incredible destiny of Joan of Arc, but also to highlight the myth constructed throughout the centuries or how history and humans have taken on, remembered, interpreted and sometimes made use of this universal character.

THE SAGA OF JOAN OF ARC

Play as an actor and judge in the most famous judicial investigation in Rouen’s history! Witnesses, reconstructions and audiovisual effects will take you on an unusual experience which dives into the heart of the 15th century. From her military actions to retake the French throne to her ordeal at the stake, experience an epic and captivating story through the medieval rooms of an historic monument.

Go back in time to 1456 at the heart of the process aiming to pardon Joan of Arc, deemed a “heretic” and burned at the stake twenty-five years earlier at the Place du Vieux-Marché. Through this interactive journey, experience the investigation carried out in 1456 by Jean Juvénal des Ursins, archbishop of Reims and head of Joan of Arc’s second trial. Interpreted by 23 actors, the witnesses of this story give their version of events until Jean Juvénal assembles the documents to ascertain the real portrait of ‘the Maid’.

Each room in the archbishop’s palace is dedicated to part of Joan of Arc’s life, written based on authentic extracts from the records of her trial.

Emotion and education hand-in-hand: this second multimedia space (3 freely accessible spaces) will allow you to understand how the myth of Joan of Arc was created throughout the centuries: there are various angles of approach (the Arts, the Republic, the Church…) and in various forms: films, tablets, virtual historians, displays…

To finish, take advantage of your visit to discover the magnificent Salle des États and the bright Aubigné Chapel in the Archbishop’s Palace*. Dating from the 18th century, the chapel was completely renovated in 2014. The Mythotheque and these rooms can be visited separately from the 1st tour. *Subject to exceptional closures 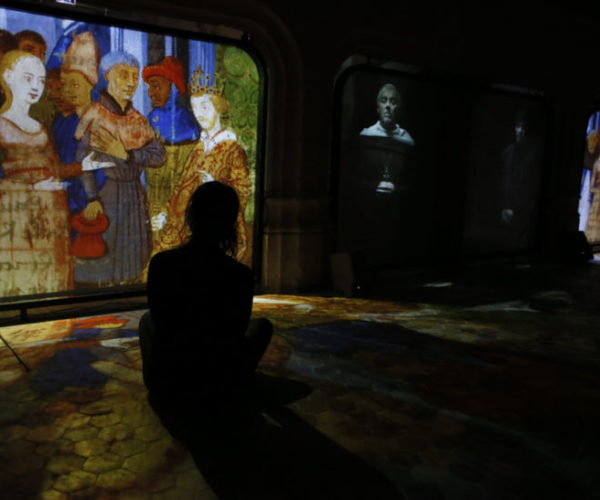